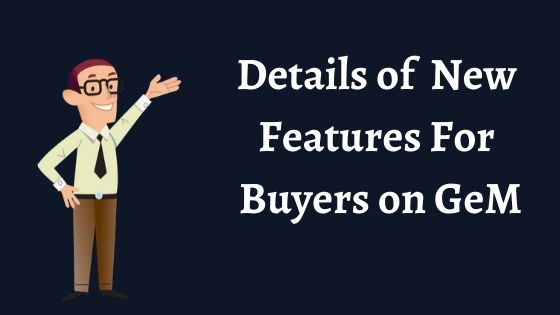 The GeM is the famous portal for the sellers or buyers who want to sell or buy their products to government or from government. Some new features related to Buyers added on GeM.

At the time of bid, creation buyers can now choose the delivery period for up to 180 days.

If buyers are eligible for the EMD exemption in the technical evaluation, then the seller's credentials can now be validated by the buyers.

The ATC library rejoined the section (s) most frequently used by buyers. Class(s) are categorized under the relevant tab for easy consumption by buyers.

Additional terms and conditions for buybacks have been added for buyers to easily pick up in the Etsy library and include it in the bid.

If the buyer wishes to proceed with less than 3 resellers or two OEMs / brands, they will have to upload approval from the competent authority.

The buyer will seek the necessary approval from the competent authority before placing a request on GeM for additional terms and conditions w.r.t bid.

Allow the buyer to take any seller's price offer as a reference to the bid:

The buyer is now offered the option to select any price offer from the catalogue as the reference price for the bid so that the lack of participation by the selection for a price reduces the possibility of bid failure which is not inappropriate.

Now buyers can choose the bid duration between 10 and 21 days.

Additional deduction area on the bill

Buyers can now apply additional deductions such as TDS, TDS under GST and other applicable taxes at the time of the creation of the bill.

To support ranges that require a quantity to measure in 3 decimal e.g. Steel measured in metric tons, the quantity received by the buyer at the time of CRAC manufacture can be specified such as 66.045.

Now buyers have the option to cancel the product contract after invoice creation by the seller:

Now buyers get the option to cancel the product contract even if the invoice has been generated by the seller, provided the delivery period has ended 15 days.

Electric vehicle project bids can now be called on GeM. Buyers can enter an estimated project price during the bid creation process and choose a contract period of up to 16 years.

Know all about GST Registration in Delhi